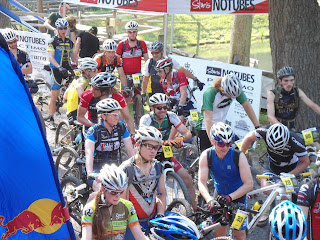 At 47 miles, today's stage is the longest distance of the week, but because it is relatively fast, it took less time to complete than stage 2.  It's been a long, hot day, so I may be a bit confused on the order of events.

We started with a neutral roll out from the camp.  There were 2 big climbs before the first aid station.  It was mostly gravel roads, but there was a super fast washed out rocky descent early that separated the group a bit.  The single and double track that followed varied from smooth-as-greenway to kinda rocky to sandy to DEEP standing water and mud.  In some places the water was so deep I think 1/2 my pedal stroke was under water.  Whatever was under the water had grip so most folks rode it with no problem.  After the single track we were on a (paved!) road for a few miles to the mile 17 aid station.  I rode with single speeders who were glad to see me because I had gears and they could draft me as the road was mosly flat here.  We passed a horse and buggy along the way.

The road turned uphill before the next aid station where my wife would meet me.  To get there we did 2 big climbs and then the biggest climb of the day leading up to the mile 34 aid station.  Mostly we were on a variety of dirt roads - the biggest climb being the rockiest.  There was one section of "single track" that followed the river that started out deceptively looking like sweet single track and turned into a bunch of large rocks and some mud and trees with arrows pointing which way to go.  Myself and the for-mentioned single speeders alternated riding a little bit, then hiking.  Some places were almost too difficult to hike the bike through.  Fortunantely this section wasn't too long.  After this part we were soon onto a hard-packed rail trail.  It was so smooth it felt like the turbo kicked in.  It was on this part, at mile 28ish, that pro-racer Barry Wicks went flying by me with his telltale smile.  I guess he had problems earlier in the day.  After this section we went through a train tunnel which had a very welcome cool breeze blowing through it.  It was kinda dark though (and a little scary).  I thought the aid staion was coming up before the big climb, so I wasn't really prepared like I should have been hydration-wise.  I made it up the seemingly never-ending dirt and rocky road to Penns View overlook where I met the wife for some water, Heed, and more Perpeteum solids.  It felt great to have  the cool water dumped on me. 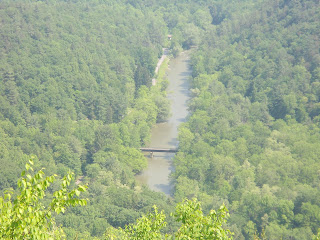 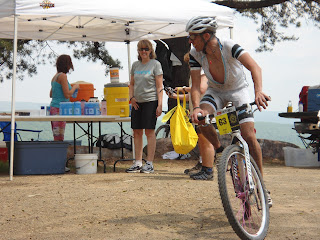 From here there was two more big climbs, but it was mostly rolling gravel roads.  On some of the descents it was kinda cool to see Speed Limit 25mph signs while my bike computer indicated I was going upwards of 35mph!  There was one more impromptu aid station offering water at about mile 42.  I passed it up and rolled on back to the scout camp.  We rode a bit of single track and then, finally, through the Red Bull finish line.

Yesterday I finished 3rd which put me in 3rd for GC of the Masters 40+ category.  Today I struggled a bit, so maybe a top 5 or 6.  We'll go back to the camp and check official results tonight to see where I end up in GC.

Colt from Cycling Dirt is here doing interview and race videos and updates.  You can follow along with the race at: http://www.cyclingdirt.org/

Tomorrow's stage is another long one at Raystown Lake with even more climbing.  I'm gonna rest up! 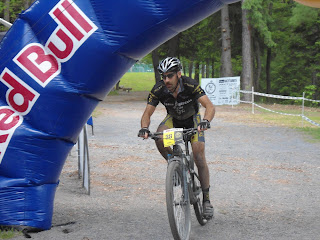