Most of the spring season, my training was focused on doing well at MTB XC Nationals.  As explained in a previous blog, that didn't go well.  But the resultant form set me up for a very good effort at Wilderness 101 last Saturday.  It was probably a bit ambitious to try to do well at a 5 day criterium and road race series that started the Tuesday after Saturday's 101 mile MTB race.  So, after 2 days with lack-luster results I decided to take an uncharacteristic day off of racing to be more competitive for the final 3 days of racing.  It would be a perfect chance to do a recovery ride and familiarize myself with following courses on my new Garmin 810.

I loaded a familiar course into my 810 and headed out for an easy spin.  Twenty minutes later I was in Troutman.  I have to ride on Main Street for about 300 yards and then make a left turn, so I usually up the pace a bit to try not to disrupt vehicle traffic.  Today was easy.  No oncoming traffic.  I continued on my way toward Lake Norman State Park - thinking about wanting to try out my full suspension MTB that I had just converted to 650b and hadn't been able to ride it in the woods yet.  Oh well, plenty of time for that later.

And then it happens.  An angry brown dog comes running off his porch toward me at full speed with ill intent.  Now, I've been chased by dogs before.  Most just want to bark or chase behind.  The ones that want to bite usually go for the feet/pedals.  I've even had one get a mouthful of my rear brakes.  Usually a squirt from a water bottle or quick sprint takes care of the situation.

This dog was focused.  My Garmin data shows the impact occurred at 22.4mph.

Someone I don't know says something to me.  I want to get up, but I can barely breathe.  I look around and asses the situation.  My bike is on the ground near me, with the front wheel off.  There is a dog 100 yards up the road, whimpering, curled up in a ball.  There is a guy still talking to me.  I look at my bike again.  Both legs of the fork are broken and the top tube is cracked.  I'm going to need a ride home.  An SUV passing by asks if I need help.  I really didn't know, so I said I was fine.  I wasn't.  I reached for my phone, and after a bit of fumbling, I was able to actually use it as a phone to call my wife.  Fortunately she was nearby and quickly headed my way.

This is about where the damage assessment really started to take place.  I've crashed enough times that I am used to the scrapes and bruises.  To be sure, I had plenty of those.  But i could feel things moving inside of me that weren't supposed to be.  I still couldn't breathe well..  Collar bone.  Ribs.

I tell the guy, "Sorry about your dog." as I watch him drag himself back up the porch he had just come barreling down moments ago.  The owner didn't seem too concerned about his dog.  At this point my phone rings.  It's my wife wanting better directions to where I actually am.  After trying in vain to explain it, and still finding it hard to breathe and talk, I hand my phone to the guy standing nearby.

Pretty soon my wife's bright yellow Miata appears on the scene.  Somehow she manages to load me and the bike in the car.  She hands me my helmet.  I notice it is smashed on one side.

It was a slow day at the hospital.  They were able to do x-rays right away.  The doctor was impressed with the way I managed to break my collarbone in 2  places.  Broke/cracked some ribs, too...

They sent me on my way with a sling and some pain pills and instructions to follow up the next day.  Which I did.  Surgery for my collarbone is set for Tuesday.

It has been truly humbling to receive the amount of care and support that I have received from friends and family.  I appreciate everybody's offers to help out, for well wishes and prayers.  I am a very blessed individual.

Though I hate being off of the bike, I remind myself that things always go according to the plan.  It's just not always my plan.

I won't be seeing you on the trails in the near future, but I hope to be turning over the pedals on the trainer bike pretty soon. 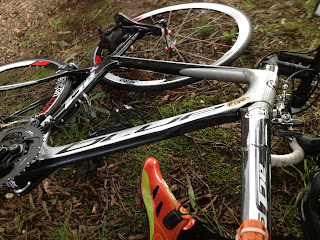