When I crashed on a recovery ride in August and broke my collar bone in 2 places, the doctor told me it would be completely healed in 10 weeks.

At least I was racing when I crashed this time. It's gotta be more cool to crash in a deep single speed field running 3rd in the first nccx race of the season than to hit a dog on a recovery ride, right?  Still, broken is broken.  Sidelined again.  More time off bike.

So, no Wilkes 100K for me.  My cyclocross season is pretty much shot. I'm able to ride on a trainer tho, so it shouldn't be too much of a fitness hit.

I do plan to do Waffles by Donation at the North Mecklenburg Tuesday night training races in November.  I won't be racing, so I'll have more time to visit with folks. Stop by to chat and eat some waffles for a great cause! 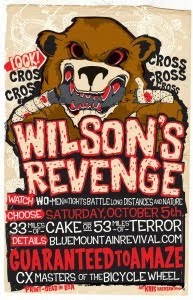 After last weeks 3 stages of flat terrain it was good to get back in the Mountains of Pisgah in the Wilson's Creek area for the "53 miles of terror" of Wilson's Revenge.

We all rolled off together, mass start style, at 9:00am on a beautiful North Carolina morning.  The first few miles were reminiscent of last weekend.  The start was only a small incline and the lead pack stayed together as the asphalt quickly turned to gravel then began to turn upward.  We all draft together.  There is no big push immediately.  The road is wide and the big dogs are up front controlling the pace.  As we progress the chit-chat dies down.  The pace intensifies.  Gaps take longer to close.  I make sure to position myself behind attentive riders.  If they let a gap open, I go around them.  My plan is to  stay with the lead pack as long as reasonably possible.

By the time the climb starts in earnest, the pack is down to about 15 riders.  Some are on borrowed time.  One by one riders pop off the back.  Some gradually, some more spectacularly.  When the pack was down to 8 riders it was my turn to pop.  Mile 12.  The pack slowly drifts away.  I consider drilling it to try to catch back on, but a glance at the profile taped to my top tube reveals quite a bit of this climb remains.  I decide to follow a more appropriate pacing strategy and climb at my pace, hoping to catch back on at the rest area or on the descent.  Two more riders would catch and pass me on the climb(teammates?), putting me in 10th place overall.

It didn't take long to get to the first aid station at mile 14 or so.  I blow through.  As expected, none of the lead riders had stopped.  The climb continues.  The first part of the course has the majority of the climbing.  Beyond this, the course is mostly made up of roughly similar-sized up and down rollers that make it difficult to see what's coming up by looking at the profile.  So I ride up and down the rollers.  It's really rather fun.  Climb for a while.  Descend for a while.  Jump on the pedals out of the corners to keep the speed up on the next climb.  Simple.

There was one particularly steep section.  I managed to ride most of it.  It was probably the most technical section of the day.  The technical part was going well.  But it ended up being too steep for me to keep the pedals turning over.  So, rather then falling over, I dismount and hike to the top.  Using the time off-bike to eat a gel and drink some fluids.

The scenery is great.  I haven't seen any bikes in some time, though.  Only the occasional Fishermen early on, then later, pick-up trucks with dog cages in the back (bear hunters?).  At one point I saw a pick-up truck a bit too close.  I rounded a left-hand corner while descending and there he was.  Both of us were in the center of the road.  It wasn't going to work out well if we stayed that way, so I swerved right which pointed me toward a rather steep drop off.  I managed to get my left leg out and slide the bike around the corner, clip back in and hammer on.  I kept my head through the ordeal, which is why it worked out OK, but from that point on I was a lot more cautious around blind corners (which was most of them).

Some time after mile 33.15 my Garmin locked up.  I happened to notice it after seeing a racer hike his bike toward me - presumably headed back to aid #2 at mile 31.  He had double flatted.  I was going to give him the distance back when I realized my mile reading was exactly what it read last time I had checked it.  I manged to re-set it, but now I wasn't sure what mile I was really at.  I did know from earlier calculations that I should be able to finish in 3:40.  Since we started promptly at 9:00 am, my goal finish time would be 12:40.

But all of this takes away some of my focus.  Resetting, recalculating, plus, at this stage of the race there is quite a bit of descending.  And while the gravel is a little loose, it's the washboard bumps before some of the corners that cause me to slow more than I really need to (usually).  That, and the fear of what's going to be around the next corner.  I feel like I'm not pushing myself.  I occasionally look back.  But there is no one there.

I pass a rider with their bike upside down changing a flat.  So, now I'm 8th overall and it motivates me to push hard every chance I get.  I'm still not exactly sure how accurate my finish time and distance calculations are, but now I am resolved to push to the finish.

When I get to the paved road I know the finish is near and I time trial back to the start/finish.  I didn't catch anyone else, but I did cross the line at 3:39.  So, mission accomplished.  It would have been nice to ride with the lead group a bit longer, but I wasn't far behind them.  I would be scored 4th in the 40+ category.

Posted by teamssr at 9:08 PM No comments: