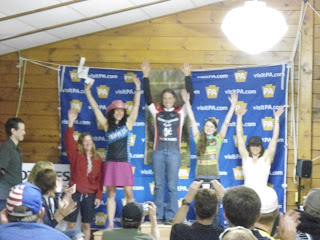 Today's stage was only 26 miles.  Except for being a bit sniffly, I felt pretty good at the start.  ...until the guys in my class took off.  I hung on for a while, but with 33 minutes on 4th and 20 minutes behind 2nd I decided the prudent thing would be to ride my pace like I'd been doing all week.  We had a bit of gravel road, a sandy/rocky section then a long, fast double track descent.  The day's only major climb signaled the 1/2 way point.  We rode some pretty cool single track after that and then there were rocks.  There were some newly cut single track side-of-mountain very loose rock switch back descents then through some more water and back to the sandy/rocky section.  About 5 miles out we were back onto the open road and then onto the trails and around the lake for the last time at the Scout Camp.  It felt great to finish!

Awards followed later that afternoon.  I was 7th on the day, but more importantly I held onto my 3rd in GC.  I got some cool schwag and Trans-Sylvania finisher awards.

Looking back at my pre-race goals I achieved every one of them.  I learned a lot of things about what I needed to do to be more prepared and areas I needed to focus more on in training.  I finished on the podium in stage 2 (the GC podium was a bonus!).  I made some friends.  I practiced good recovery techniques and managed to be smooth and focused enough to have only 1 crash and 1 mechanical (both on stage 5).

All-in-all it's been a very good week. 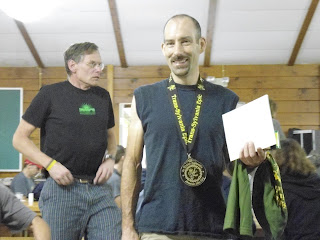 Posted by teamssr at 7:32 PM No comments:

Today's stage was billed as the queen stage.  I'm guessing she's queen of the rocks...

We met at the Scout Camp and rode 3.5 miles at a casual pace to the race start.  There was quite a bit of gravel road before the first off-road sections.  Some of us pace-lined but when the road turned steeply uphill it was every man for themselves.  Soon we were off road onto an insanely steep rocky climb.  It was kinda tough to hike the bike up this section.

The trail following the hike-a-bike section was narrow and grown up with foliage on both sides that made it tough to tell where the trail was going or the surface your wheel was on.  This gave way to a long descent that was mostly double track.  It was a bit technical in spots from fallen trees and washed-out parts, but very fast.  Soon we were onto quite rocky single track where I saw the 1st and 2nd place in GC in my class along side the trail.  I found out later that 2nd place had a mechanical and would DNF.

The first aid station came up at mile 20.  This marked the end of gravel road and onto some really nice, flowy single track.  This ended a bit soon for my liking.  Never-the-less we dropped out onto the road (paved in sections!) and climbed back up to aid station 26 which was the same one as mile 20.  I exchanged a bottle the wife handed me and continued on.

The next section was a mixture of rideable rocky single track to barely rideable (for me anyway) single track.  It was a ridgeline trail with a beautiful overlook, but I had to stay focused on the trail.  Eventually we were off the ridge and on a fast descent, then undulating rocky single track.  It was somewhere through here I remember wishing I would be bitten by a rattlesnake so I could be airlifted out of there.  ...but I continued on bouncing from rock to rock.

At mile 33 we dropped onto the road where we had an option to grab a water bottle and were told we had 5 miles to go.  Most of the next 3 or 4 miles were open road.  Then we were back onto some double and singletrack including a waterfall climb which I hiked.  Eventually I came to the finish line where they had water, coke, red bull and adult beverages for the weary.

Because of limited parking at the start/finish location, my wife was unable to get pictures.  Tomorrow will be the final stage with the start and finish from the camp.

With 2nd place in GC having a DNF today my 4th place finish on the stage moved me up to 3rd in GC.

See you on the trails!
Posted by teamssr at 9:20 PM No comments: 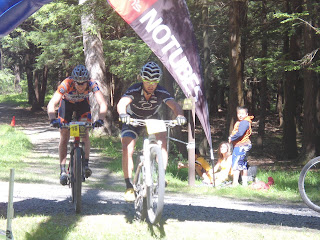 Today's stage was an easy one on paper.  28 miles total at RB Winter Park broken down into 4 mini stages of about 10-20 minutes each of actual racing and then neutral riding and regrouping between each stage.

The elevation profile was similar for each stage.  Start going uphill, jump into single track, descend.  Seems easy enough.  The format doesn't particularly suit me because when I stop riding my body tends to quickly jump into recovery mode and doesn't wanna go again.  Fortunately everyone is pretty tired so that part wasn't really an issue today.

We staged in a wide field in a single row (moto-cross style) for the first stage.  It didn't seem right to be sprinting into the singletrack on a stage race - but we all did.  We bounced along the rocky climb then on some soft power-sapping mulch type surface then down some awful, rocky, wet descent.  Some rode, some hiked, some flatted, some crashed.  I manged to hang on and ride it out, but flatted somewhere along the line and decided it would be faster to run it out then fix the flat.  So I ran the bike thru the flat muddy section to the finish.

Having fixed the flat before riding to the next section I was ready to go again.  The second stage was much like the first.  This time I was extra cautious and I didn't flat but I did drop my front wheel into some huge hole and went over the handlebars, cutting my knee and getting some blood on my bike.

After an aid stage pause, we made our way to stage 3.  Things went a bit better.  The rocks were mostly spaced apart a bit so I just kinda bounced a long, but at least I felt like I was in control again.  I gained back a little bit of time I lost on the first 2 stages.

There was a long neutral ride (by an angry rattle snake) to the final segment.  It was kinda nice to just be cruising along in the woods on a very nice day with a bunch of other beat-up MTB'ers for a while.  The pace made an abrupt change when the starter said go and we had to sprint up a hill to dive into the single track.  I got a good start, but got in a bad spot on the singletrack entry bottleneck.  I hammered/bounced along the 2 mile segment until I came to the rocky water fall descent.  Things didn't go bad, but I got trapped behind someone and lost a little time.  It was very difficult to pass after this, so I didn't get a chance to make up much more time before the finish.

Tomorrow is a 38 mile stage with a brief hike-a-bike then some real MTB trails. 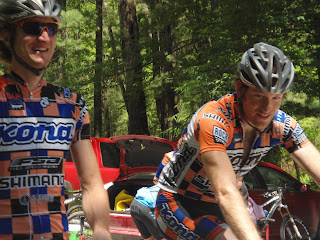 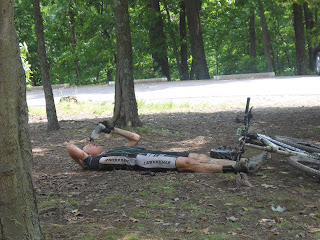 While it was still hot and humid, the trails for stage four were a welcome change!  Today was a remote start on the Allgrippa's trail system at Raystown Lake.  These are purpose-built MTB trails and they are FAST.  There were miles of high speed whoops with the option of getting plenty of air.  There was very little mud, rocks or roots just fast flowy single track.  Of course you have to go up for every down, but the climbs were mostly in short punchy sections and the average speed was quite fast. 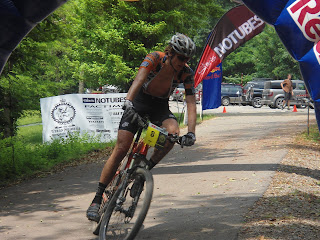 There were some shake-ups in the GC standings.  I actually outran some of the racers in other classes that had been beating me so I felt pretty good about that, but the guys in my class were on it and I lost a little more time on GC.  I finished a respectable 4th today and I am now about 2 minutes off the GC podium.

Tomorrow's stage is another remote start.  It will be 4 short races with the combined time counting for the stage standings. 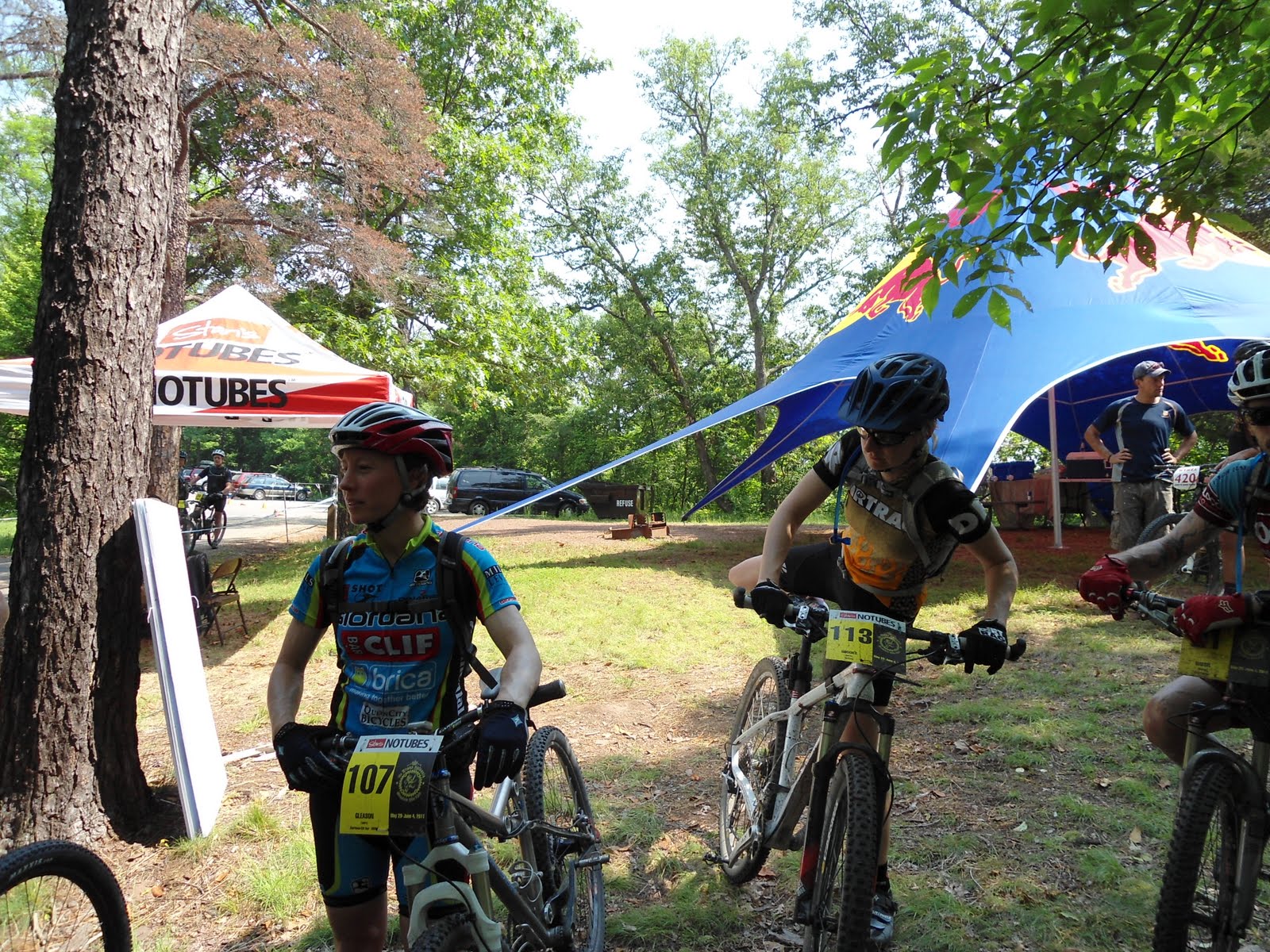