I had always wanted to do the Burn 24 Hour Challenge.  As a team.  I had talked about it with my friend, Jon.  But with other racing commitments, I was never able to do it.

This year I had the opportunity.

My awesome Cycle Works team loaned me a fully equipped trailer and some bike lights for the event, and my son was going to be in town for pit support.  I would have no excuse.  Except for the little issue of not having trained for a 24 hour race.  But then I looked at it from a different perspective.  Although I made the choice to enter the race, everyday people are faced with challenging circumstances.  How we react to them is up to us.  I would do my best.

Raceday starts at Noon on Saturday with a LeMans style run to the bikes.  I guess I was the only one that didn't know you wear running shoes, then change shoes when you get to your bike.  So, a slow run and a slow shoe change saw me enter the woods near the rear of the field

But I am quickly passing people.  Perhaps too quickly, I think.  So I try to follow some other riders.  For about a lap and a half.  At that point I can't take it anymore.  I have to run my own pace.  I hammer the descents, but avoid over-powering the climbs.  I'm riding at what I feel is a sustainable pace.

For the first 10 laps I am just logging miles.  Being smooth.  Being careful to eat and drink appropriate amounts.  I am running 2nd, but no sight of leader Morgan Olsson.

As the daylight hours come to an end, I hop onto my full suspension bike which is already equipped with lights.  At first, lap times remain largely unchanged.  The night has a re-vitalizing effect.  It becomes increasingly important to stay focused on the trail.  But as the sunlight fades completely into oblivion, my lap times slow.  I am more fatigued, so the climbing is slower and I can't see far enough ahead to bomb the descents.  I am a bit unsure of battery life and recharge times, so I am a bit tentative about running my lights on full power.

When it's time for a battery change, I swap back to my hardtail bike which has been set-up with a more powerful set of lights - even on low power.  This would be my weapon of choice for most of the duration of the night.

At some point in the night, an alien invasion occurs.  A nice touch by the Burn crew.  Plus it signified the final major climb of the lap and that a sweet descent was just ahead.

At 3:20am the leader of the race catches me to lap me.  Although it doomed my chances of winning, it was a bit of an honor that it took last years winner that long to lap me.

During the night I couldn't help thinking about when Jon did his first race lap at the Burn 24.  It was at night, after a rain so he decide to use his first-MTB-he-ever-owned aluminum, hardtail, cantilever brake 26" Trek 4300 instead of his brand new full-carbon, Trek Fuel because the 4300 had knobbier tires.  To which he received no end of ribbing for running the old bike.

On the last lap before dawn it rained.  Just enough.  I look up briefly and smile.

As night time drew to a close I was in pure survival mode.  My goal becomes to keep riding until dawn.  My pace seems ridiculously slow.  And though I am getting passed more frequently by the team racers, I am still passing riders in worse condition than me.  It's motivation to keep pedaling.

Pretty soon the sun begins to rise, as it always does.  The birds begin to sing.  It's time to ditch the lights.  As I set out for what I hoped would be my last lap, I have my son check with scoring to see where I stand, and how many laps I have to do to lock into 2nd position.

On fully sunlit trail, I become a markedly better rider.  I can once again hammer the descents.  Even the climbing is better as I can pick and choose the best line over the rocks and roots easier.  I have delusions of riding all the way until Noon last lap cutoff.  But, as the lap comes to an end the effects of the last gel and Red Bull wear off and I once again realize how fatigued I really am.

Fortunately, my son informs me that I am solidly locked into 2nd place, even though it's only 7:30 in the morning.    After 23 laps, I call it quits.  When the leader sees I have stopped, he also calls it quits.

The whole final lap I feel a bit bad about the possibilty of ending early.  Upon further thought I decide to leave the unraced hours for Jon.  My way of leaving an opportuniy open for what might have been.  And what could be.

You never know what a day may bring...

Tuesday, I got home from work late. I had a short workout, so i opted to do it on my trusty CompuTrainer.  While merrily pedaling along, watching the Giro on one computer and digital scenery go by on another, my phone rings.  It's up-and-coming NUE superstar Wes Richards.  He says he's going to race Wildcat 100 on Saturday and may be able to get me a cheap entry and wonders if I wanna go.

Wildcat 100 is a pretty new event, and it's a first time NUE series race.  And it's in new York. And it's a 10 1/2 hour drive. And we would have to leave Thursday after work.

Did I mention this was Tuesday night?  I hadn't even washed my bike from Cohutta yet.  I had been too busy getting my butt kicked in masters road racing.

I ask my wife what she thought about me going. Since we spent our anniversary weekend at Cohutta I figured I'd get a resounding "no" for skipping out on Mothers day, too.  Instead, I got a "if you think you will have fun..."

Wednesday, I ask my boss if I can have off Friday.  Oh, and I need to leave early Thursday, too.  He says "go ahead, have fun"

Hmmmm... This seems to easy.

I talk to one of the guys I work with, who's judgement I respect. He says "when are you going to be able to do it again?" Surprised by his respone, I tell him, "Not til next year". He prophetically says, "you should do it.  You never know what will happen between now and then."

So that night I raced the time trial at Charlotte Speedway as I had previously planned, went home and stayed up late washing my bike, sent the wife scrambling for some "obligatory" Wildcat items (according to the racer's guide - which turned out not be so obligatory) and packed everything I might possibly need for a 100 mile MTB trek into unknown territory.  The good news was that my son, Anthony, was going to be able to make the drive from Pennsylvania to be pit support. One less thing to worry about.

Thursday morning comes early as I had to be at work at 6:00 am to be able to leave early. I meet Wes after work and we make the drive as far as Harrisburg, PA before crashing for the night.

Friday we arrive at the Williams Lake Project, the main event site, for registration.  There is some confusion about the remote race start (as in, where it actually IS).  None of the trails are marked for pre-riding yet and none of the riders we meet seem to know very much about the course.  The common theme among the racers' seem to be that it will be a lot of road and that it's probably going to rain. Which it wasn't nearly enough of for me and it did...

So, we ride around the main event site looking for trails to pre-ride that might be included in the race.  Much of it is obviously not frequently ridden, soft dirt and a bit rocky.  There aren't a lot of miles of trail, and with the predicted amount of road riding I opt to keep my fast rolling, low knob tires on for the race.

We pedaled to downtown in light rain to downtown Rosendale for the 6:45am start.  From there we rode back to the trails at the main event site. They are wet now, but mostly rideable with my tire choice.  I just hoped we wouldn't have to ride them again at the finish.

As it turns out there was quite a bit of road, rail trail, and rain.  I won't take time to go into all of the details but the hi-lights included a bit of a road hike to Lippmann park. The constant rain made for slick trails and treacherous bridge crossings at the park which was a shame as they would have a blast being able to hit them at full speed in drier conditions. Another road hike back took us to the biggest climb of the event. All on easily traversed gravel double track which was really quite scenic (where it wasn't too foggy) and enjoyable.

...and then it became less enjoyable trails as we rode on cow trails (literally) thru pasture and thru orchards (and more orchards).  In all fairness, it wouldn't have so bad had it not been bog-you-down peanut butter muddy so many places.

After seemingly endless miles of mud - some of which I didn't even have enough rear grip to propel the bike forward on level terrain, much less climbs, necessitating frequent dismount/remounts - we end up back on familiar rail trail. I figured we were near the end.  It was flat and fast - one place I knew I could make up time.  So I drilled it. And drilled it.  And drilled - what was that sign?  100 milers turn left, 60 milers go straight????   Marvelous.  I have to turn off of the easy-going path and take the peanut butter mud climb (more dismount/remount).  But, just like all the other sections, this section also came to an end.

To my relief, up next was a familiar section of road - leading back to the finish.  We enter Williams Lake and there it is - the glorious Kenda finishing arch. Signifying an end to a hard fought, arduous day of racing.  I sprint to the... What are the cones for??? Guess what- we have to do another lap of the trails.  Which are now very muddy and, you guessed it, more dismount/remount peanut butter mud.

But this section also came to an end.  And I indeed finished. I endured.

A better choice of tires for the conditions would have helped tremendously, but at the end of the day I had no mechanicals, I had great aid station help by my son at 3 aid stations (my only stops) -and I managed a top 15 finish.

All that remained was to wash the mud off me ...and the 10 1/2 hour drive home.  Which we did straight through.

I was glad I went, glad I had a friend who was thoughtful enough to invite me, and a son willing to make the trip to help out. Who knows if I'll be able to do it again.?

Grab life by the handlebars! 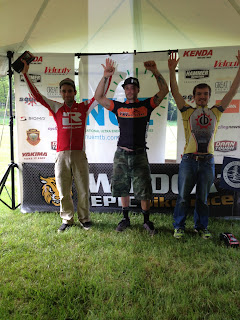