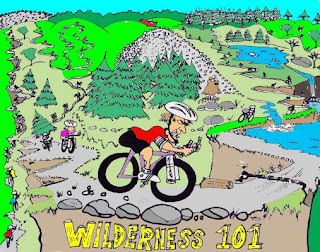 I was really looking forward to racing Wilderness 101, having missed out at the very last minute last year.  I was already familiar with the trails from the two years that I did the Trans-Sylvania Epic Stage Race. I was (mostly) healed-up from my recent crashes and was on pretty good residual form because of attempting to peak for MTB XC Nationals.

The neutral start rolled off at 7:00 am on what looked to be a Goldilocks day - not too hot, not cold or rainy.  Just right.  ...with a chance of rain.  My favorite.

The first segment is all gravel road or double track.  Even with the 5 mile initial climb, the pace was really quick.  Average pace to the first aid station was over 15mph.

Aid Station #2 comes up pretty quick as well.  There are a few short, rocky downhill single track sections, some flat sections where I have to pace line between climbs, and one really sweet, fast (smooth!) single track trail that ends too soon.  It's the section with the three narrow bridges that provide for an awesome photo op.  Sometimes I think the photographers are just there to distract you so you don't focus on the bidge and they get an awesome action shot of a rider plumetting to their demise.  Probably just me though...

The aid station #2 stop goes well, thanks to the quick work of my crew/son.  I may be a little off on my chronolgy, but on the way to aid #3 several things of note happened.  The best of which is that I am feeling good and passing riders.  The worst of which involved going over the handle bars in slow motion.  After MTB XC Nationals I was feeling pretty bad about my technical skills on the rocks.  But these rocks are different.  I can ride these rocks.  In fact, I think I would rather do 3 laps of Wilderness 101 then 3 laps of the Amateur Nationals course.  But that's another story... Anyway, I was riding well over the most highly-concentrated rocky trail when I came to what was essentially a quite rideable rock "bridge"  Unfortunately, I started to stray off line a bit, touched the rear brake a bit and lost enough momentous that my front wheel hit the next big rock and stopped abruptly.  So, of course I tried to ride out the nose wheelie and ended up over the bars.  Fortunately I landed on previously bruised/injured parts of me.

Somewhere around mile 50, on some gravel road, I got rattled at by a rattlesnake.  Later, I saw a huge eagle-shaped bird flying in the woods.  I was behind/under it, so I can't confirm it's eagle-ness.

Aid station #3 follows a rapid descent.  I blow thru at full gas, to the shouts of "We got a roller!"

An extra single track section was added between aid #3 and #4, pushing back my estimated arrival to aid #4.  I was a little concerned about running out of water, But, it's quite overcast with ocaasional very light rain and I would make it in good shape.  The additional single track section was less rocky then the surrounding trails, but very tight and twisty.

At aid #4 I make my last stop.  Smooth and fast.  My final supplies to the finish.  This section of the course takes me near the Scout Camp where Trans-Sylvania is based, so I know most of the area pretty well.

Immediately after the aid #4 stop we do a long washed-out, rocky, double track climb.  I'm still feeling pretty good and I am able to climb it in the big ring.  Although I have been catching and passing racers all day, the thought occurs to me for my goal to be that whatever happens, not to get passed by more than 3 racers.  When we get to the similar-condition descent I hit it full gas.   I was doing really well, dodging all the large and pointy rocks.  And then I find it.  The rock with my name on it.  I feel the rear rim bottom out hard.  Followed shortly by a soft, squishy feeling rear tire.  Dang it.  I am racing tubeless, so I stop and blast it with CO2.  No hissing.  Hoping it will stay sealed, I carry on.  More squishy feeling.  So, I stop again.  Same result.  At this point I have only 1 Co2 cartridge left.  My choice is to keep blasting it and try to make it to at least aid #5, or to take the time to put a tube in it.  I chose to put a tube in it.  While stopped alongside the trail, three riders blow by me.  By the time I am back on the bike I am right in the middle of two teammates that would have been the 4th and 5th riders to pass me.  The single CO2 canister was not enough to fully fill my tube with as much pressure as I would like, plus now I have a tube that I have to be careful not to pinch flat.  There is still more rocky descent to go.  I started out gingerly at first, losing ground to the 2 teammates.  I couldn't hold back any longer...  I let off the brakes and tried to chose the smoothest lines, keeping my weight forward as much as possible.  Being recently invigorated by my brief time off the bike fixing the tire, it wasn't long before I dropped the two teammates.

We crossed a bridge that was barely wider then my handlebars.  I rode it "chicken-wing stlye"  by putting both elbows out and just rubbing them agains both sides the whole way across.

I blow through aid #5.  Five miles to go.  It's a contrast of smooth, flat rail trail and ridiculous rocky, river-side mostly hike-a-bike section.  Somewhere in there was the iconic train tunnel.  Soon I am back on the bike, cautiously riding over the remaining rocks and back on the road to Coburn.  Riding on pavement, I can really feel the squishy rear tire squirming around.  I wasn't sure if I was losing air, or if it was just that low because that is all the CO2 I had.  Regardless, it was motivtion to put the hammer down to the finish as quickly as possible.

I beat my goal time of 8:00 hours, coming in at 7:50 something.  I think the announcer called me out as having finished 10th, which is pretty cool because I am not old enough to race the masters class in the NUE series, so I race the open class with all the big dogs.