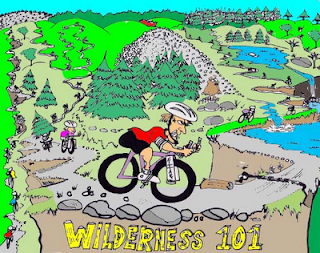 What if I could've gone harder?
What if I could've dug deeper?
What did I leave out on the trail?
These are all questions that went unasked early on Saturday morning as the Wilderness 101 MTB race became Reality 101 somewhere on the road to Mount Nittany Hospital while I followed an ambulance that contained, my pit support, my friend, my son.
Focus and intensity.
It's how an ordinary racer like me occasionally achieves extraordinary results.
It becomes quite easy to focus when only one thing in your life seems important.
The drop bags I had just put in the bins for aid station #2 and #4 didn't matter.
The elevation profile of the race I had taped to my top tube didn't matter.
The two iced-down water bottles I put on the bike filled with water and heed didn't matter.
The nutrition and supplements I filled my jersey with didn't matter.
My choice of tires and air pressure didn't matter.
After hours of some pretty serious concern on my part; prayers by me, friends and family, and a battery of tests and countless hospital staff's questions answered on my sons part, he was released from the hospital with no immediate danger but with some questions left unanswered.
No matter what happened on that day, some things remained unchanged:
I will trust in Him
I will live for His glory
It's what I was made for
I was made in His image
I will race for His glory
My God can do great things
With my God, I can do great things
...and so can you.
You can do great things
You were made in His image.
See you on the trails!
...but not this week.  I'm gonna mix it up with the roadies this week.
Posted by teamssr at 8:39 PM No comments:

I didn't think I was going to be able to race ORAMM this year, so I missed out on getting an entry.  Once again I had to wait for someone willing to sell and transfer their entry.  I'm glad I got in for my 2nd year.  Last year I didn't fully realize how big of a deal ORAMM is.  The entry limit is capped at 500 and it's a goal event for an awful lot of riders - from those just starting out in endurance racing to professional MTB racers.

I wasn't sure how the legs would respond after yesterday's race.  I started somewhere near the middle of the 500 riders.  When the gun went off (early) for the 8:00am start I started passing riders at every opportunity.  I decided to keep an eye on the power meter and ride a little above threshold and see where I ended up going into the first single track section: Kitsuma.  For 7 miles I kept a steady pace and constantly passed people.  I wonder if the same people that are kind enough to let me by on the climb up old 70 are the same people that have to push their way to the front for the start?

I was far enough toward the pointy end of the field to be able to ride Kitsuma without having to wait on hike-a-bikers.  I did notice that yesterday I had taken a wrong turn onto a short walking trail.  I managed to avoid that mistake this time.  The bike trail was much more ride-able and I avoided yesterdays endo site.

I knew I would be missing a bit of yesterdays power, so my goal was to be smooth today.  I reminded myself of this while doing the Kitsuma and Jarrett Creek descents.  I didn't blow through any switchbacks today.

I only have one water bottle cage on my 26" bike, so it would be important to hit all the aid stations.  I had the help of #1 son at aid station 1,2 and 5.  I had drop bags at 3,4.  Aid station #3 was at the top of Curtis Creek.  Curtis Creek is a very long climb, and the miles slowly tick by.  It would be easy to go too hard early, or get impatient part-way thru the climb and get completely cooked before the top.  Again, I watch my power meter and try to ride a pace that is hard, but maintainable to the top.  It seems like half of the race is spent on this (and the next) climb.  But I reach the top feeling pretty good.  After a brief panic by the volunteers to find my drop bag, I reload and carry on down the Black Mountain fire road descent.

The descent goes well, though I nearly hit an oncoming vehicle (Sorry, blue Element driver!) and it was a bit too short to be recovered for the Black Mountain climb to aid station 4.  I follow the same climbing protocol as Curtis Creek.  Watch the power and stay focused.  The stop at aid #4 goes well, but there is a bit more climbing up the Blue Ridge Parkway than what I remembered from last year.  Knowing that there is only one more big climb after this one, and two more sweet descents keeps me motivated to press on at that "uncomfortably difficult pace" that is endurance racing.

The hike-a-bike section from the Parkway up Heartbreak ridge is a bit of a struggle, but soon I'm back on my bike and headed down Heartbreak.  Last year's ORAMM was the first time I had seen this descent.  It really helped having seen it before for this year.  I stayed smooth, but the Rhododendron were way overgrown making it a somewhat stressful (but successful) descent.

Heartbreak is a looong descent.  It seems like I have just left aid station 4 when I pop out onto the road at aid station #5.  Number 1 son hooks me up, and I begin the climb up Mill Creek.  The first part of the climb is large, loose gravel, and for the first time I feel at a big disadvantage on 26" wheels.  But this section is short, and it's much more well-packed gravel the rest of the way back to Old 70.

I hit the Kitsuma trail with another rider, which is good because I probably would have try to go too hard up the steep, switchback climbs.  The climb goes well, and we hammer down the descent.  I feel pretty good on the descent.  But it's easy to feel that way when descending.

When we complete the descent (I actually passed a few people here) and pop onto the road I notice the fatigue had really started to set in.  I struggled to ride endurance pace.  The legs started to come back around and I pace-lined back toward Old Fort with another racer.

When we get to the final railroad crossing, just minutes from the finish, there are 4 other racers waiting for a train to pass by.  They had already been waiting 3 minutes by the time we got there.  Two or 3 minutes later the train finally passes and we hammer into town.  It didn't seem fair to attack the riders that had been waiting longer, and the legs were just fine with that decision.  I rolled in at 5:41.  19 minutes faster than my goal, 28 minutes faster than last year ...and exactly what my coach predicted.

It had been a great day, and a great weekend of racing.  It was nice not to have any issues and to have great weather and great pit support and to see so many of my racing friends.

I am very blessed.

See you on the trails!
Posted by teamssr at 7:57 PM No comments:

This was the inaugural Jerdon Mountain Challenge, so there were no past results to help me predict my finish time.  It's basically 1/2 of ORAMM which I did in a little over 6 hours last year, so I figured 2:45 would be a reasonable goal.  My secret, fantasy, dream-world finish was, of course, to win the race and in doing so have the course record.  That lofty and fanciful dream was crushed when Jeremiah Bishop rolled onto the starting grid.  So I took a more realistic approach: Hang with JB as long as possible.  Hopefully, at least to the singletrack 7 miles up the road.

When the gun goes off I clip in and start working my way through the pack.  We started behind a pace vehicle through town before getting the go ahead to race up the first big climb on Old 70.  This climb suits me well and I'm able to hang with the lead pack even as the number of riders in the pack dwindles.  Of course there is a difference in my climbing and Jeremiah's.  He's riding pretty casual, and I'm pushing threshold.  No matter.  I'm in the same lead group he is.  We all blow thru the 1st (cheering) aid station at mile 7 and begin the climb up Kitsuma.  I entered the single track in 5th place.  So, pretty much no matter what happened the rest of the day, I've had a great race!

The first part of Kitsuma has some added water bars that are difficult for me on the 26", but the switch backs and descents went a bit better on this bike.  There is some confusion with some optional hiking trails that have been added on the climb.  JB is headed back towards me, certain that he is going the wrong way.  We get it straightened out and continue the climb.  On one of the descents I get a little crossed up and end up over the bars.  No big deal, except now my helmet retention system has come unhooked and I don't really wanna stop to fix it.  So, when I catch back up to 2 riders on the descent I decide to safely follow them rather then trust in my own (some times lacking) dare devil descending abilities and fix the helmet at the next aid station.

At aid station #2, I meet #1 son.  I fix my helmet, get another water bottle and hammer on.  More switchback climbing.  When we start the switchback descending I blow through the first switchback ending up deep in the rhododendron.  I decide I need to do a better job keeping my speed in check.  Three hundred yards later I find myself in the rhododendron again.  Just not quite as far.  OK, I need to do an even better job keeping my speed in check...

On a fire road climb I catch another rider.  He says he's not a racer and tells me that I'm in 6th, about 3 minutes back.  Cool.  I continue to push the pace.  This is gravelly fire road ascending and descending.  I miss the stability in the corners of my 29'er, but the fire road is smooth enough that I may be rolling faster on this bike.  At about mile 24 I catch 5th place.  He's got his bike upside down fixing a flat.  I certainly know that feeling.

I roll into the final aid station, getting a water bottle hand-up from #1 son, no stopping required.  From here I know that it is 4 miles to the finish.  All paved.  I hit time trial mode.  Fork locked, hands near the stem, tucked as much as possible, keeping an eye on my power - being sure to focus on the number I know I can maintain for the next 10 - 12 minutes.

I roll past the "Welcome to Old Fort" sign and start looking for the arrows that will guide me back to the Gateway Museum and the finish line.  There it is.  A policemen halts traffic and I make the left turn onto the museum property, over the bridge and around the final corner where the clock ticks 2:18.  Sweet.

When they post the results I'm listed as 2nd in Master's.  45 seconds behind the class winner and 8 minutes behind overall winner, Jeremiah Bishop.  A good day.

ORAMM tomorrow.  Full recovery mode the rest of the day.

See you on the trails - but not today!
Posted by teamssr at 1:35 PM No comments: