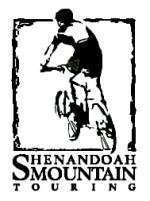 My first Shenandoah 100.  I broke several endurace racing rules, but fared OK in the end.
I didn't have any real good course descriptions, other than the elevation profile and a few You Tube videos and previous year blogs.  I based my tire choices on that info and it worked out (mostly) OK.
The Shenandoah 100 traditionally rolls out at first light on Sunday morning of labor day weekend.  We staged in our projected finish time results: 7 hour, 8 hour, 9 hour, etc. I lined up in the 9 hour group.  I think 500 riders started (do 2 tandem teams count double?).  It was warm, but too early to check for clouds, so I wasn't sure if rain would play a factor or not.  I had no rain gear.  I had sunglasses.
I felt like I had a pretty good race strategy as far as nutrition, hydration and aid stations.  I like to travel light so it's pretty important to get it right.  The aid stations are pretty well equipped and I try to stay a bit flexible as the race unfolds.
Forgive my race description.  This was my first time here and I spent more time reacting to the course than planning for it.  I knew where all the climbs were, but I didn't know what was single track, fire roads or paved roads.
The first aid station came at mile 10.  There was the usual road start to spread things out then onto some double track for a substantial climb and descent leading to aid station #1.
The second aid station was at mile 31.  The 21 miles in between featured a bigger climb and descent, some single track and some pace line riding on the road.  I'm pretty sure the climb featured some hike-a-bike too.
The trip to aid station #3 at mile 45 was a bit more eventful.  I had locked my fork for the climbs.  We were climbing so long I forgot I had it locked out.  I had been making up a lot of time screaming down the descents.  A lot of endurance riders race hard tails and my full squish bike is just ...faster.  Anyway, I was attempting to scream down a descent when I botched a super fast left-right-left (or was it a right-left-right?).  I didn't want to slow down for it, but my timing was off or the bike slid, or whatever but I hit a tree with my left hand, something happened after that, but I don't really remember what.  I do remember flying (kinda high) through the air, minus bike, off the side of the mountain.  ...and then a funny thing happened.  I landed in a large sappling which bent over under my weight and lowered me, more-or-less, gently to the ground.   My hand hurt from clobbering the first tree, but all else, including bike, was fine.  So I hammered on.
Aid station #4 came up at mile 57.  It featured some slippery rock hike-a-bike (I think it was here) and some more pace line road riding.
The trip to aid station #5 is famous (feared?) for the longest climbing section.  I tried to stay in a rhythm.  It felt like I was going too slowly, but my heart rate said I was going fast enough.  I have to remind myself that everyone slows on the climbs.  A few folks passed me early, but I think I passed most all of them back by the "top".   It wasn't really the top, as the climb continued after the aid station.
The final aid station came at mile 88.  I'm pretty exhausted by now, but there aren't too many other riders around.  With 12 miles to go, and 1 more big climb (the same one from the start of the race) I resolve to keep the pedals turning over.  I remind myself: "you don't have to race up the hill, but you do have to get up the hill."  Pretty soon I start to see tents from the Stokesville campground - where the start, and more importantly, the finish are located.  I roll thru the giant inflatable finish line marker as the announcer calls out my name and number and the official clock reads 9:01.
After a veggie burger (surprisingly yummy), some fruit, pasta and lemonade we checked the results.  I ended up 44th in my class (solo male open) and 58th overall.  No flats, no injuries.  A smooth race.  A good day enjoying God's creation.
Oh, the endurance rules I broke: No new equipment on race day:  New shoes, and new bibs.  I struggled a bit clipping in.  I will investigate and rectify...
See you on the trails!
Posted by teamssr at 7:41 PM