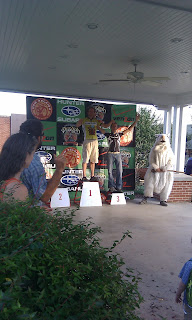 Today's stage was a remote start.  While our bikes were loaded into a large Uhaul truck (2 trips required), we were loaded into one of two trolley's for a sight seeing trip around Brevard on the way to the start.  We still ended up waiting for our bikes and the start was delayed 1/2 hour.  Undaunted, we rolled off for a brief down hill and up 9 miles of climbing and 4000 feet elevation gain.

I settled in for the climb at a heart rate that was sustainable.  The group I was with kept shrinking and became a pace line.  Which would have been OK, but my heart rate was trending more and more into the tempo zone.  I decided to let them go and dropped off the back.  As soon as I did the climb steepened, and the pack in front slowed.  When it turned briefly downhill I kept on my heart rate pace and went past them.  I eventually caught a racer in a Pisgah jersey and I figured it would be a good idea to follow a local heading into the fabled Farlow Gap.  What started out as a good idea turned into wishful thinking as he blasted away at the first hint of a rocky descent.

During the wait for our bikes to arrive in the morning I asked around to find out as much info as I could on Farlow.  The general consensus was that there was no shame in walking down (yes - down) the rocky descent.  I had also been given the heads up on the gnarliest sections.  I have to say that Farlow Gap is everything it's reported to be.  I rode as far as I could hang on, dismounted and remounted as appropriate.  The giant white squirrel mascot was there which always cheers me up.  After hiking down and up Farlow I felt like the hardest part of the day was over.

I tried to read trail names as we raced but I just couldn't bring myself to slow down to read them.  There were lots of creek crossings.  Some of them were rather difficult to traverse even off bike.  Some places there were log bridges to cross.  I don't think they were much easier than fording the creeks.  There was some hike-a-bike, but most of the trail was quite rideable and much drier then yesterday.  The locals have a clear adventage.  Some of the trails are really fast, but I never know what's around the next corner.  I rode with one local who was kind enough to show me the line through several miles of singletrack.  When he dropped a chain I carried on... Not sure how I feel about that, but I made sure he didn't need anything as I passed by.

Near the end of the stage we rode down most of the beginning climb from yesterday.  I was thinking it would be a great way to the end stage - flying down a long fire road descent, but alas we turn and climb back up to the Black Mountain trail.  Fortunately I had ridden this part (on SS earlier this summer) and I knew what to expect.  And of course the black mountain descent was the same as yesterday.  It's a little sketchy in spots on a cross country bike, but it's fast, and after a bit of hike-a-bike at the begining, it's all downhill to the finish.

One of the highlights of the day was the trolley ride to the start sitting with pro racer Adam Craig.  I don't think there's any other sport where average working guys like me can compete with (or at least at the same time as) professionals.  Pretty cool.

One of the lowlights was washing and lubing my bike only to find that my front shifter was broken and not just gunked up with mud as I had expected.

But the highlights continued when local bike shop Sycamore Cycles was open and servicing other racer's bikes (including one Cannondale Scalpel for Jeremiah Bishop).  They had a replacement shifter and fixed it while I waited.  Amazing service.

Oh, and another hilight - I got a jersey for winning yesterdays stage.  I'm not sure where I finished today.  I was getting my bike fixed during the awards presentation.  Hopefully I can actually make one of these before the week is over.

Tomorrow is a shorter stage, but still pretty tough.  The weather is forecasted to be great.  It should be another amazing day riding my bike in God's beautiful creation.

See you on the trails!
Posted by teamssr at 8:34 PM