Work commitments threw the training schedule into disarray lately.  Usually I like being an adult, but sometimes it seems overrated...

I had to skip Fools Gold 100 mile MTB race last weekend, but I did get to race the final 2 Southern Classic races at Bur-Mil Park and Dark Mtn the last 2 Sundays.  In order to keep the training volume up I did a long road ride after each of the races.

The Sizzler at Bur-Mil started out damp (and rooty) so I mounted up some tires I wanted to evaluate in case of rain for Pisgah next month.  They worked well, but I got a lousy start and wasn't feeling super speedy.  I ended up 7th.

Dark Mountain went much better.  There wasn't much time to sprint before the single track and I got tangled up in the field.  The climbing and descending suited me pretty well and I was able to chase back to 3rd.  As an interesting aside, I got to see 2 spectactular endo's real close-up.

Today I was back on schedule to race Rivers Edge, a 50 mile race, as a warm-up to Shenandoah next month.  The venue moved from USNWC to the Wood Run trails at Uwharrie.  I had never raced at Uwharrie before.  I heard it was kinda rocky and that people flat there pretty regular.  This caused some concern when the rear tire I planned to race punctured during the Wednesday night race at USNWC.  Undaunted, I mounted another one up for the race today (I got 'em on a promo deal).

The rocky report proved accurate, although the rockiest parts were similar to what Trans-Sylvania epic would bill as "sweet single track."  The smaller loop was sweet single track and provided a chance to recover.

We started on a gravel climb.  Being new to the trails I tried to fall into a speedy group, but not a crazy-fast group.  I've been working on my starts, so I decided to push it a bit on a long double track climb.  Every MTB'er knows that a long double track climb is followed by a single track descent.  I passed most of the folks I had been riding with in order to get a jump on the singletrack.  The Trans-Sylvania experience was paying dividends on the rocky descents:  I was able to gain ground on most riders, or at least not give-up any.

It took me a couple of laps to get into a rhythm to accurately gauge my efforts but eventually I was able to figure out when the most strenuous climbs were approaching.   I was able to ride them all, but the last couple of laps it was only with the use of my smallest 2 x 10 gear.  The tires I chose held up well - a reasonable compromise of grip vs. fast rolling.  They were perfect for 80% of the trail.  The other 20% was a bit hairy at times causing a few tense moments.  Fortunatlely there weren't any silly 60 foot drop-offs like at ORAMM or Cohutta.

So, after 5 laps around the ~10 mile course I managed to come in behind a duo team and Kenda racer Rick Pyle.  I was pleased with that result as it gives me some momentum heading into Shenandoah.  Another place I haven't seen before...

The post race food was awesome, I can't speak for the beer, but it seemed to be popular too.  The threat of hurricane weather may have kept some folks from coming out, but that seemed to make for a more casual and easy-going environment. 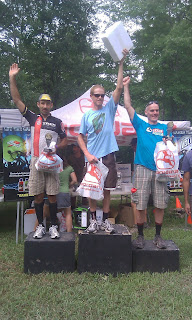 See you on the trails!
Posted by teamssr at 9:04 PM