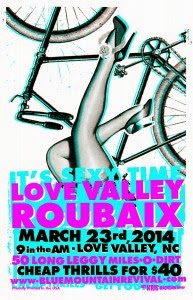 Last year's inaugural Love Valley Roubaix would have been hard to describe without using the word "epic."  It was cold, rainy, cold, wet, cold and snowy.  Did I mention cold?  So it was with much anticipation that I waited in the upcoming days for the weather forecast for the March 23rd event.  The ten day weather forecast showed sunny and 70 degrees.  Joy!  But as race day approached it became apparent that this would be another wet, chilly race.
This year I changed my bike strategy.  I opted for a disc brake cyclocross bike instead of a road bike.  I stayed with the decision to run 25c tires, but I mounted them to some new American Classic Argent wheels that are considerably wider than traditional road rims, making the 25c Clement Strada tires measure 27.5c.
On the start line it was dry but chilly for the 9:00am start.  I noticed a much larger turnout this year.  Perhaps because it wasn't raining.   ...yet.  But after the pre-race brief, while we were staged for the start in downtown Love Valley, the tell-tale rain drops began to fall.  I opted to take the rain jacket out of my jersey pocket and put it on.  A good move.
Something like 60% of the course is unpaved.  The steepest and punchiest climbs are these unpaved roads in and around love valley.  At first they are dry, even with the light rain that is falling.  And, at first the peloton is chatty and upbeat.  But the pace quickly picks up.  As the lead group shrinks, the peloton quiets, then becomes more of a grimace as the road surface becomes wet enough to cause rooster tails that soak first through shoes and socks then gloves and anything not completely sealed and waterproof.
I was dropped from the lead group early.  The fast, cold start was not to my liking.  The first big  climb up Brushy Mtn was more to my liking.  I caught and dropped several riders who had managed to hang onto the lead group longer than I had.  The cyclcocross gearing proved to be benefit for the climbing.  At this point I felt pretty good.  Almost comfortably riding a strong, sustainable pace.  But the rain picked up near the top of the climb and I began to get very cold.  I knew I was in for a chilly descent.
By the time the road surface turns to pavement and levels out it is raining hard enough that the rain drops actually start to hurt at the speeds we are now able to go.  I know the descent well.  My plan is to get down it as fast as possible so I can warm up on the next climb.  I was spun-out with the cyclocross gearing.  Even so I was able to catch and pass another rider who had passed me earlier.
The rain slowed for the flat section along Hwy 115 to the aid station at mile 30 where there were several riders already calling it quits out of coldness or from mechanicals caused by the miles of grit from wet dirt  roads.  I still had brakes, but I had certainly used up a bunch of pad.  I had cable adjusters I could use to advance the pads if I had to, but, being a new bike I wasn't used to adjusting them and I wasn't sure I was thinking clearly enough to adjust them the right way.  So rather than taking the chance on making things worse I just decide to manage my brake usage and hope they lasted until the end.
The final big climb is paved, but steep and relentless.  I'm so cold at this point that my jaw is soar from shivering.  My entire body complains when I get of the saddle on the steepest portions, but the extra motion seems to help keep blood circulating.  The slow climbing pace means the miles are ticking by slowly.  I start to get impatient - just wishing it would all end.  But the occasional rider I catch and pass reminds me that there are many racers that will be suffering more than me:  those not dressed appropriately and those simply taking longer to finish.  I press on knowing that the quickest way to get warm at this point is to ride to the finish as fast as possible.
When I got to the short, punchy climbs back at Love Valley the unpaved roads were now very soft which meant more rolling resistance and a bit more treacherous descending.  I stayed off the brakes as much as possible.  But I completely ran out of rear brakes.  After a couple of corners taken with the brake levers held all the way against the bars I decided to check the elevation profile on my Garmin to see how many more descents there were.  Fortunately, on the last few descents I could see far enough ahead that there were no impending dangers and I could just let it roll.  Which I did.  Eventually rolling through the finish at 3:01.  Narrowly missing my fair weather goal time of 3:00.  Still, I finished 7th in my class.
I had to dismount my brake-less bike to go down the hill to where my car was parked.  I guess I had just enough brakes after all.  It was an epic day and one of those races where you are proud to say you completed.
See you on the trails!